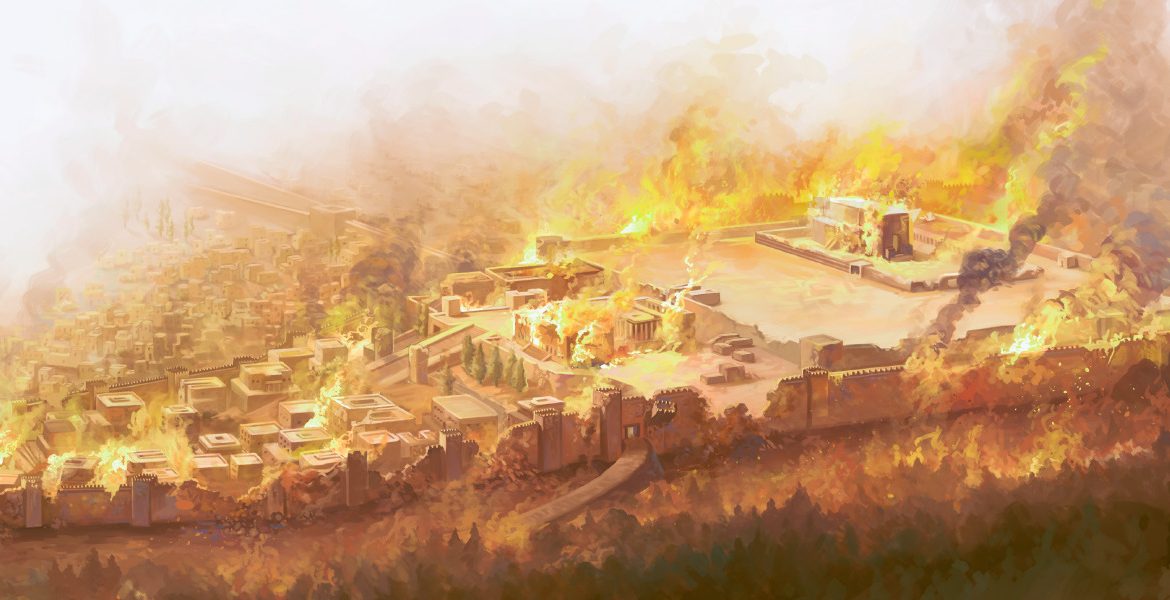 First the end was near; now, the end was here. Two and a half years after the siege began, on July 18, 586 BC, the Babylonian army breached the walls of Jerusalem. The princes of Babylon set up their thrones in the Middle Gate of the city and began to take over and remake the government. Zedekiah and the royal family fled. Those left behind, refusing the LORD’s instructions through Jeremiah, packed up and went to Egypt, forcing the prophet to go with them. What was the cause of this entire disaster? It was sin, unbelief, and the refusal to repent. If only one of these kings had turned around and led the people back to God, this entire horrific tragedy would have been averted.

1-3 Fight A 30-month siege. Blocked access in and out. Drought, famine, disease. Breached walls in 586 BC. Princes set up thrones.

8-10 Fire Burned city. Exiled all but the poor to Babylon.

15-18 Faith Yahweh’s promise to Ebed-melech due to his faith.

Tables turned: The king and those in power die. The poor, Jeremiah, and Ebed-melech survive and are blessed.

Note Ishmael’s and Johanan’s involvement below.

“Serve Babylon here. Work the land. I’ll represent you.” Jews return from the various lands to which they had fled. Peace and prosperity.

Ignores warnings from Johanan and leaders re: Ishmael.

Baalis, Ammon’s king: destabilize Judah to keep Babylon off his own back. Inside job: sent Ishmael to kill Gedaliah.

Gedaliah first. “As they ate bread together.” Then political massacre.

Ishmael kills 70, dumps them in cistern. Spares 10 who offer food.

Takes all pro-Babylon people at Mizpah captive – to Ammon.

Though innocent, saved group fears retaliation from Babylon and so intends to flee to Egypt, farthest land from Babylon’s controlled territory.

On the cover of Biblical Archaeology Review, March/April 1999: “Seal of an Assassin: Ammonite King Plotted Murder of Judah’s Governor”

Brown agate with white bands. 0.5-inch diameter, 0.2-inch thick. A small hole was drilled through the center of the scarab-shaped seal for the setting.

Depicts a winged sphinx wearing an Egyptian-style apron. The sphinx has a tail in the shape of the letter S. This shape is specifically Ammonite.

Additional confirmation and mention of Ba’alis.

This drawing shows the broad end of a clay cone perhaps used as a stopper for a juglet.

At center, a winged beetle pushes a ball of dung.

1-7 Request: Leaders ask Jeremiah for the word of the LORD.

Commitment to obey, no matter what He says.

Option 1: Remain. Trust God. Don’t fear Babylon. The LORD will build you and plant you, not pull you down or pluck you up. Cf. 1:10.

Option 2: Depart. Fear Babylon. Disobey God. Trust Egypt to give you peace and prosperity. The LORD will send you the sword, famine, and pestilence that you attempted to escape.

Arrogant men defy God, take Jeremiah and all these to Egypt.

Accusation: “You’re lying! Baruch incited you to destroy us!”

“If we stay, Babylon will kill us or exile us! Egypt can save us!”

Jeremiah buries large stones in clay under the brick pavement that covered the large courtyard at the entrance to Pharaoh’s palace.

He declares that God will place Nebuchadnezzar’s throne on them.

Heliopolis: “Temple of the Sun.”

1-14 The LORD’s Condemnation of Idolatry

Unbelievably, the Jews in Egypt are serving idols again!

15-19 The People’s Commendation of Idolatry

“The Queen of Heaven (likely Ishtar, goddess of fertility) blessed us when we served her and now has punished us for neglecting her!”

20-30 The Promised Consequences of Idolatry

He was executed three years later.

Placed here: the end of Jeremiah’s prophecies to Judah (chs. 2-45).

Sorrow, pain, groaning, lack of rest due to heavy message.

“Woe is me!” He focuses on himself and blames the LORD.

“It’s not about you, but about My doing what I promised.”

“Don’t seek personal greatness for yourself.”

Blessing: “Your life as booty.”