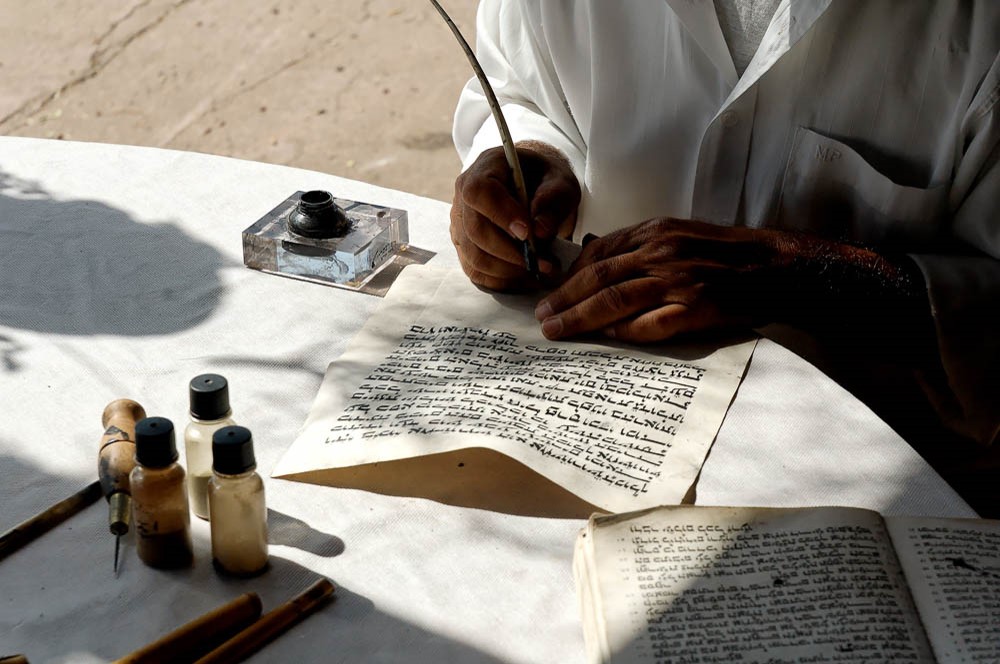 How We Got the Bible – the Old Testament Canon

How We Got the Bible

What is the Bible?

The Bible (Gk. biblia, “books,” biblion, “book”) is to Christians the inspired, inerrant, complete, and authoritative Word of God.

It is one book, though composed of 66 books: 39 in the Old Testament and 27 in the New Testament. God-breathed, it was given by the Holy Spirit over about 2,000 years by 40 different authors from three continents, who wrote in three different languages. Shepherds, kings, scholars, fishermen, prophets, a military general, a cup-bearer, and a priest all penned portions of Scripture.

Yet again, it is one book, with one message, about the one God.

Note: The word “Bible” has therefore been applied to any book regarded as authoritative in any particular sphere. You may see a book called, “The Hunter’s Bible,” or, “The Gardening Bible.” etc.

The Old Testament: begun with Abraham, expressed through Moses, intended for Israel, until the coming of the Messiah-Christ.

The New Testament: promised in the Old, accomplished through Jesus Christ, intended for all people, until He comes again.

The Old is to the New as a foundation is to the house built on it.

The Old Testament: Why it Matters to Us

Diagnosis and conviction of sin, driving us to the gospel of grace.

Rom 15:4 For whatever was written in former days was written for our instruction, that through endurance and through the encouragement of the Scriptures we might have hope.

1 Cor 10:1-14 Paul wrote Gentile churches, insisting that they understand the Old Testament! Israel was “baptized” through the Red Sea, nurtured and blessed by God (“the rock was Christ”), and yet they forfeited the Promised Land. How? They craved evil things, practiced idolatry, committed sexual immorality, and tested the Lord, and grumbled. The point? If the Corinthian Christians practiced these same five things, they also would perish and forfeit heaven (our Promised Land). The same is true for us today.

How Did We Get the Bible?

Do we have the right books? Who decided on these books? When and how? Why are they arranged as they are? What is / are the Apocrypha?

The biblical canon is the body of authoritative books that serve as the standard or rule for God’s people.

In fact, the books’ canonicity and authority came from their inherent inspiration from God. Jews and Christians simply acknowledged that.

2 Tim 3:16 All Scripture is God-breathed and profitable for teaching, for reproof, for correction, for training in righteousness; 17 so that the man of God may be adequate, equipped for every good work.

A jeweler does not create the identity, the value, the size, or the character of a gem. He or she simply recognizes and confirms what its actual nature.

Likewise, God’s people recognized and confirmed, but did not create, the canonical books.

Individual books were received and recognized as they were written. Various lists were not needed or prepared until the books had circulated or questions arose. This process necessarily took time.

Again, no list gave any books their inspired, canonical authority.

The biblical writings existed and were recognized much earlier. The Da Vinci Code is pure fiction, refuted by manuscript evidence.

When the Word of God was written, it became Scripture and, inasmuch as it had been spoken by God, it possessed absolute authority. Since it was the Word of God, it was canonical. That which determines the canonicity of a book, therefore, is the fact that the book is inspired by God. Hence a distinction is properly made between the authority which the Old Testament possesses as divinely inspired, and the recognition of that authority on the part of Israel.

The LORD spoke to Moses, giving him the Law and having him write.

Josh 1:7 “Only be strong and very courageous; be careful to do according to all the law which Moses My servant commanded you; do not turn from it to the right or to the left, so that you may have success wherever you go. 8 “This book of the law shall not depart from your mouth, but you shall meditate on it day and night, so that you may be careful to do according to all that is written in it; for then you will make your way prosperous, and then you will have success.”

Later Scriptures regard Genesis, Exodus, Leviticus, Numbers, and Deuteronomy together as comprising “the Law,” or Torah.

These five books, as a unit, are also called the “Pentateuch.”

Later writers treat them as accurate, historical, and authoritative.

1 Chron, for example, traces history seamlessly from Adam onward. The entire OT sees these five books as the God-given standard.

About 300 years ago, liberal “scholars” proposed the “Documentary Hypothesis.” They claimed (without any manuscript evidence) that the Pentateuch consists of various, man-made, uninspired texts, later edited and woven together and falsely attributed to Moses. NOT SO!

Note Genesis 1-11 is the foundation for everything else in Scripture. When liberal critics disparage Genesis 1-11 as a man-made product of multiple human authors, they undermine creation in six days, God’s definition of gender, sexuality, and marriage, the origin and nature of sin, the Flood, and so much more.

Moses even gave some criteria of canonicity. Deut 13:1-5

Later writings, built on the Law, cited and applied its truths.

These books were not formally chosen by a committee; they were “canonical” when they were written, regardless of when, how, or by whom they were accepted and recognized. Example: If some people questioned the book of Esther, because it did not contain the word “God,” that did not change the fact that the book was inspired, authoritative, and canonical. The fact that some books were recognized more quickly or slowly does not change their inherent status as the Word of God.

Neh 8:1-8 In 444 BC, Feast of Tabernacles was reinstituted. Ezra (priest and scribe) read the book of the law of Moses to the people.

Ezr 7:6 This Ezra went up from Babylon, and he was a scribe skilled in the law of Moses, which the LORD God of Israel had given … 10 For Ezra had set his heart to study the law of the LORD and to practice it, and to teach His statutes and ordinances in Israel.

Ezra may have written the books of Chronicles and Ezra.

According to ancient Jewish writings and tradition: the Great Synagogue, made of Ezra, Nehemiah, Haggai, Zechariah, and Malachi, collected and confirmed the books included in our Old Testament.

The OT canon closed with Malachi, over 400 years before Christ.

Now we will quote the ancient Jewish historian, Josephus (AD 37-100). He identified very clearly the exact contents of what we call the Old Testament, writing in Against Apion 1.8:

“For we [Jews] have not an innumerable multitude of books among us, disagreeing from and contradicting one another, [as the Greeks have,] but only twenty-two books, which contain the records of all the past times; which are justly believed to be divine; and of them five belong to Moses, which contain his laws and the traditions of the origin of mankind till his death. This interval of time was little short of three thousand years; but as to the time from the death of Moses till the reign of Artaxerxes [464-423 BC] king of Persia, who reigned after Xerxes, the prophets, who were after Moses, wrote down what was done in their times in thirteen books. The remaining four books contain hymns to God, and precepts for the conduct of human life. It is true, our history hath been written since Artaxerxes very particularly, but hath not been esteemed of the like authority with the former by our forefathers, because there hath not been an exact succession of prophets since that time.”

Identical to our 39, just differently counted (Minor Prophets are one book), classed (what we class as History, they included in Prophets), and arranged (in a different order).

Note: After these inspired writings, later history books were written (Apocryphal books like Maccabees, etc.), but they were not of equal authority (not inspired or canonical).

Apocrypha = “hidden” or “non-canonical.” About 15 books, written between Malachi (400 BC) and Christ, after prophecy had ceased in the time of Ezra. The Jews never accepted these books.

In AD 1546, at the Council of Trent, the Roman Catholic Church officially accepted 12 of the 15. Why? Possibly to defend their doctrines of Purgatory, prayers for the dead, sinless perfection, and salvation by meritorious works.

None of the books claim inspiration. Some even deny it and admit that there were no prophets at the time. Some falsely claim a connection to people long gone: Jeremiah, Baruch, Daniel’s friends.

In today’s Hebrew Bible that you might purchase, there are 24 books, which are the same in content as Josephus’ 22 and our 39 in our English Bibles.

The Jews call their Bible “Tanakh,” an acronym for Torah (Law), Neviʾim (Prophets), and Ketuvim (Writings).

In the Hebrew Bible, or Tanakh, the books are named using Hebrew words from the beginning of the books. So, for example, Numbers is titled, “Bamidbar,” or “In the Wilderness.”

For Christians of course, the key to the OT canon is Christ Himself. He accepted and validated the canon as it had been received and acknowledged. Jesus’ Bible held the very same contents as what we call the Old Testament.