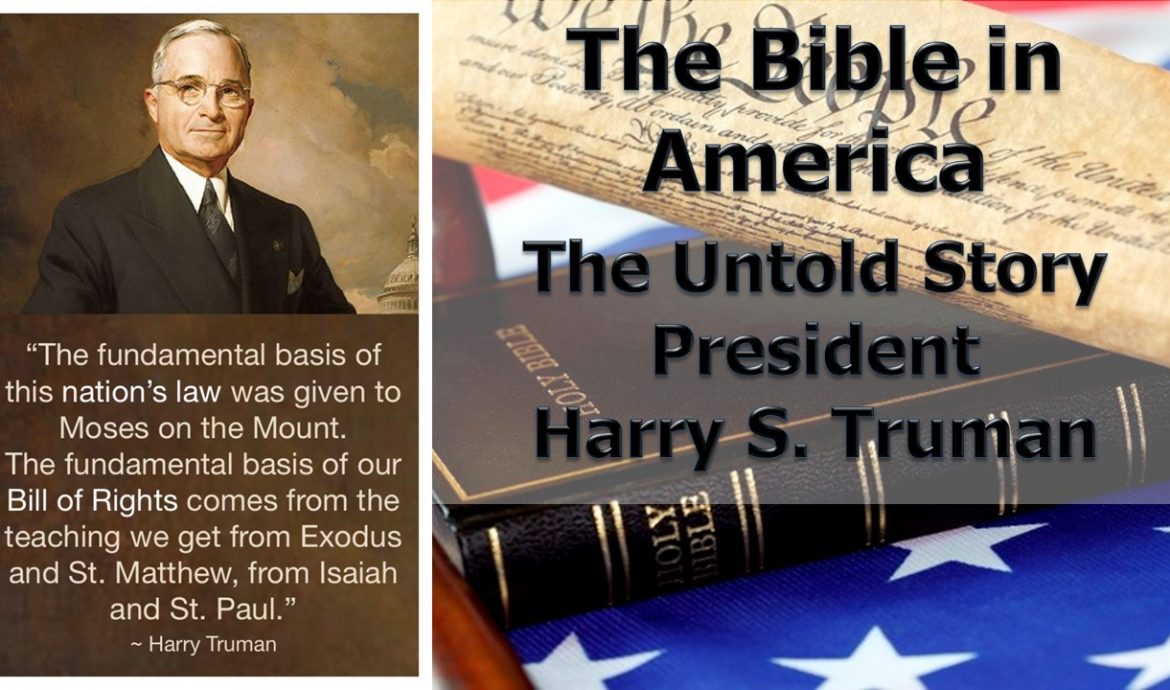 The Bible in America

Harry S. Truman, the 33rd President of the United States (1945-1953), delivered his “Address Before the Attorney General’s Conference on Law Enforcement Problems” on February 15, 1950. Among the organizations participating in the 1-day conference were the Department of Justice, the National Association of Attorneys General of the United States, the United States Conference of Lawyers, and the National Institute of Municipal Law Officers. President Truman declared the Bible to be the basis of American law, and the neglect of the Bible to contribute to rising crime.

There has been a substantial postwar increase in crime in this country, particularly in crimes of violence. This is disturbing, but it is one of the inevitable results of war, and the dislocations that spring from war. It is one of the many reasons why we must work with other nations for a permanent peace.

I might remind you that after every war this country has ever been engaged in, we have had exactly the same problems to face. After the Revolutionary War we had almost exactly the same problems with which we are faced now, out of which came the Alien and Sedition laws, which we finally had to repeal because they did not agree with the Bill of Rights. Then, after the War Between the States, or the Civil War, we had all sorts of banditry. My State was famous for some of the great bandits of that time, if you recall. We had the same situation after World War I. We had a terrible time then with the increase in crimes of violence. We managed to handle the situation, and I am just as sure as I stand here that we will do it again.

This is a problem that, in one degree or another, affects every community in the country, and every level of government. Our rural areas as well as our cities are involved in this.

It is important, therefore, that we work together in combating organized crime in all its forms. We must use our courts and our law enforcement agencies, and the moral forces of our people, to put down organized crime wherever it appears.

At the same time, we must aid and encourage gentler forces to do their work of prevention and cure. These forces include education, religion, and home training, family and child guidance, and wholesome recreation.

The most important business in this Nation–or any other nation, for that matter-is raising and training children. If those children have the proper environment at home, and educationally, very, very few of them ever turn out wrong. I don’t think we put enough stress on the necessity of implanting in the child’s mind the moral code under which we live.

If we don’t have the proper fundamental moral background, we will finally wind up with a totalitarian government which does not believe in rights for anybody except the state.

Above all, we must recognize that human misery breeds most of our crime. We must wipe out our slums, improve the health of our citizens, and eliminate the inequalities of opportunity which embitter men and women and turn them toward lawlessness. In the long run, these programs represent the greatest of all anticrime measures.

And I want to emphasize, particularly, equality of opportunity. I think every child in the Nation, regardless of his race, creed, or color, should have the right to a proper education. And when he has finished that education, he ought to have the right in industry to fair treatment in employment. If he is able and willing to do the job, he ought to be given a chance to do that job, no matter what his religious connections are, or what his color is.

I am particularly anxious that we should do everything within our power to protect the minds and hearts of our children from the moral corruption that accompanies organized crime. Our children are our greatest resource, and our greatest asset–the hope of our future, and the future of the world. We must not permit the existence of conditions which cause our children to believe that crime is inevitable and normal. We must teach idealism–honor, ethics, decency, the moral law. We must teach that we should do right because it is right, and not in the hope of any material reward. That is what our moral code is based on: do to the other fellow as you would have him do to you. If we would continue that all through our lives, we wouldn’t have organized crime–if everybody would do that.

Our local, State, and Federal law enforcement agencies have a major role to play in this whole task of crime suppression.

As law enforcement officers you have great powers. At the same time you must never forget that hand in hand with those powers go great responsibilities. You must make certain that these powers are not used for personal gain, or from any personal motive. Too often organized crime is made possible by corruption of law enforcement officials.

But, far more than that, we must always remember that you are officers of the law in a great democratic nation which owes its birth to the indignation of its citizens against the encroachment of police and governmental powers against their individual freedoms.

Now there isn’t any difference, so far as I can see, in the manner in which totalitarian states treat individuals than there is in the racketeers’ handling of these lawless rackets with which we are sometimes faced. And the reason that our Government is strong, and the greatest democracy in the world, is because we have a Bill of Rights.

You should be vigilant to enforce the laws which protect our citizens from violence or intimidation in the exercise of their constitutional and legal rights. The strength of our institutions depends in large measure upon the vigorous efforts to prevent mob violence, and other forms of interference with basic rights–the right to a fair trial, the right to vote, and the right to exercise freedom of speech, assembly, and petition.

It is just as much your duty to protect the innocent as it is to prosecute the guilty. The friendless, the weak, the victims of prejudice and public excitement are entitled to the same quality of justice and fair play that the rich, the powerful, the well-connected, and the fellow with pull thinks he can get.

I believe that as President it is necessary for me to be more careful in obeying the laws than for any other person to be careful. I never infringe a traffic rule. I never exercise the prerogatives which I sometimes have of going through red lights. I never exercise the prerogative of taking advantage of my position as President of the United States, because I believe, first, that I am a citizen, and that as a citizen I ought to obey the laws first and foremost.

And every one of you has that same responsibility. You yourselves, as I said, must be intellectually honest in the enforcement of the Constitution and the laws of the United States. And if you are not, you are not a good public official.

I know that it would be easier to catch and jail criminals if we did not have a Bill of Rights in our Federal and State constitutions. But I thank God every day that it is there, that that Bill of Rights is a fundamental law. That is what distinguishes us from the totalitarian powers. I am confident that you share these convictions with me, and that you will not lose sight of them in your efforts to wipe out organized crime and reduce lawlessness.

I know that your discussions here will be fruitful. I hope that you develop a sound plan by means of which the cooperative efforts of every American law enforcement agency will be effectively brought to bear upon organized crime.

In this task I pledge my wholehearted support.
Thank you very much.

Cory Collins is a Bible teacher and a minister of the gospel. He serves with Keller church of Christ in Keller, Texas. He and his wife, Tanya, have been married since 1977. They have two children and one grandchild.