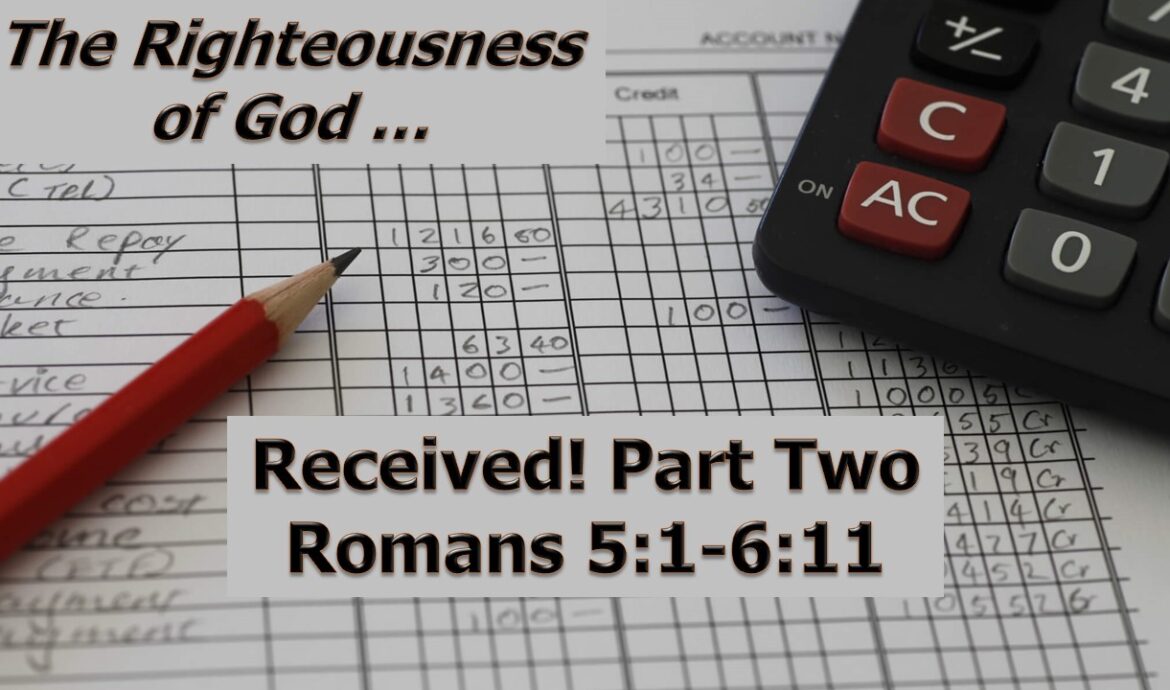 All written materials for this series will be posted on this website, http://servingandsharing.com/, under the category, “Romans – Just Right!”

All corresponding video presentations may be found on this YouTube playlist: https://www.youtube.com/playlist?list=PL7JRppjEn33aIrggv9opfecN4rksInQsM.

In Romans 4 we saw Abraham as the prototype of salvation by grace through faith. In Romans 5:1-11, we noted that the sacrifice of Jesus Christ is the ground or basis of our becoming right with God. When we were helpless, ungodly, sinners, and enemies of God … Christ died.

But – can one person’s actions really affect the whole world?

Adam – a corporate head, a representative, affecting all his posterity.

David acted for Israel, Goliath for the Philistines. Effect credited to all.

When Adam sinned, the effect (death) was imputed (credited) to all.

“All sinned” in the sense that we were “in Adam” when he sinned.

Representatively, not implying guilt, as personal sin does.

Parallel: “In David all Israelites killed Goliath.” “In Goliath all … fell.”

Clearly in Romans, we are sinners because of our own sins.

However, much error has resulted from the false teaching commonly known as the doctrine of “original sin.”

Augustine concluded wrongly that Adam’s sin itself was transmitted to all, so that “Each one is conceived in a state of inherited guilt.”

Ignored Romans 1-5a re: personal choice, sin, and responsibility.

That error started a chain reaction, a domino effect of false teaching.

Total Depravity (Corrupt from conception.)
Unconditional Election (God chooses w/o conditions. Man – no choice.)
Limited Atonement (Jesus did not die for all, just the selected few.)
Irresistible Grace (God forces salvation. You cannot tell God “no.”)
Perseverance / Preservation of the Saints (You cannot fall away).

“The Bondage of the Will” – Claimed that man, incapacitated by inherited sin, is not free to choose what is good.

Note: A teaching is false if its conclusions or implications require one to change, add to, or take from clear biblical truth.

Guilt of First Sin Imputed? No!

Rom 7:9 Once I was alive before sin (age of innocence).

Rom 5:14 Nevertheless death reigned from Adam until Moses, even over those who had not sinned in the likeness of the offense of Adam, a type of Him who was to come.

In Adam, death reigned. Those who did not sin as Adam did, still died.

The effect of his one act (death) was imputed or credited to all.

Adam is a type of Christ (the antitype).

Christ as representative head, agent for all.

All affected by Adam may be saved by coming to Christ.

Through Christ, we who receive His gift reign.

Salvation available for all, but it must be received.

The First Adam, the Last Adam

1 Cor 15:21 For since by a man came death, by a man also came the resurrection of the dead. 22 For as in Adam all die, so also in Christ all will be made alive.

1 Cor 15:45 So also it is written, “The first man, Adam, became a living soul.” The last Adam became a life-giving spirit.

The Law “increased” sin by its diagnosis and man’s sinful response.

The Law defines sin, makes us aware of sin.

The Law convicts us of sin but cannot save us from sin.

“As sin reigned in death, grace reigns through righteousness to eternal life through Christ!”

That raises a major question. Shall we keep sinning? Why or why not?

If grace is sufficient to cover all sin, why not keep sinning so that grace may increase?

May it Never Be!

Because … When you were baptized, you died with Christ to the pleasure, pursuit, practice, and power of sin.

Baptism: Who, What, When, Where, and How

Therefore, it is urgent, vital, and essential, not to be delayed.

Since baptism is “into His death,” it is the point of union with His blood.

Since “buried,” it is for those dying in sin, not those already alive.

… and for those dying to sin, who truly repent. Major point here.

Certainly not for infants, who have no sin and cannot repent.

Since “buried,” the mode is immersion, not sprinkling or pouring.

Baptism: Who, What, When, Where, and How

One cannot have a new life until the old is dead and buried.

If baptism followed salvation, those baptized would be “buried alive.”

Baptism is no mere ritual or “sacrament,” but a death and resurrection.

The fruit of baptism is a transformed life.

We Died to the Destructive Dominion of Sin.

We were dying in sin until we died to sin.

Sin is a tyrant, a dictator, a dark, evil lord.

In Christ we are set free from that monster.

We Rose by the Invigorating Power of God.

He regenerated, energized, and freed us.

Why would we ever go back to the morgue?

Forgiven. Transformed. “Rock of Ages” – “Be of sin the double cure. Save from wrath and make me pure.”

We Walk in the Sin-Conquering Freedom of Grace.

Indicative: “You rose!” Imperative: “Get up!”

Why be crippled and disabled all over again?

Grace: freedom from sin, not to sin.