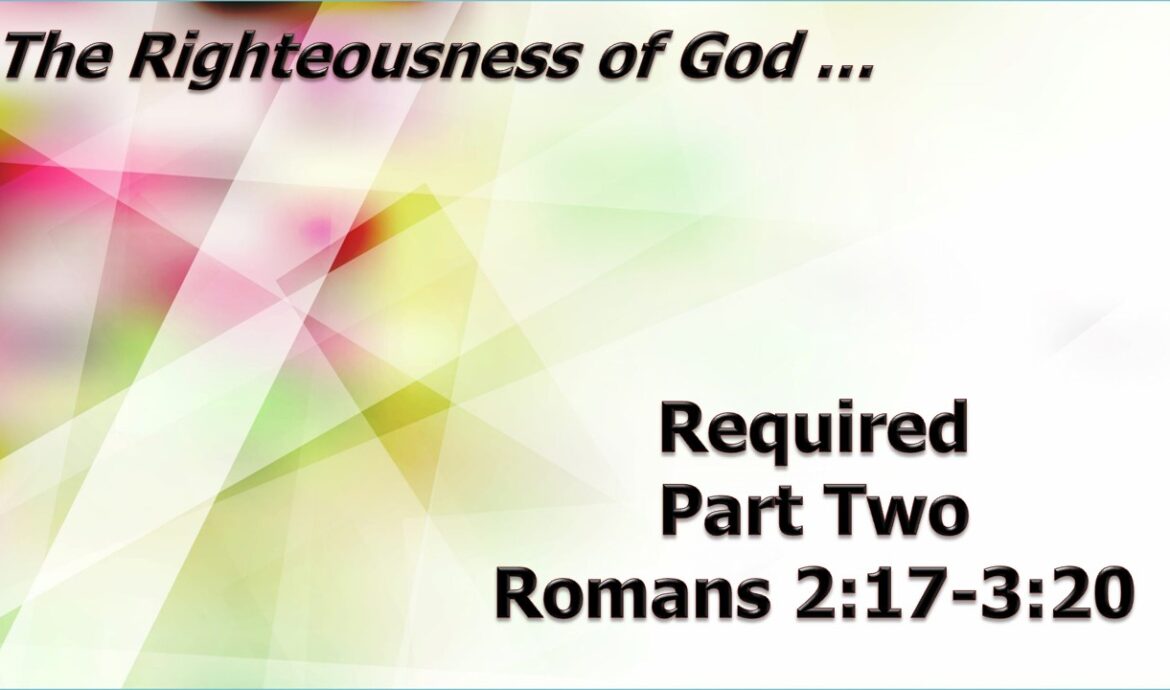 All written materials for this series will be posted on this website, http://servingandsharing.com/, under the category, “Romans – Just Right!”

All corresponding video presentations may be found on this YouTube playlist: https://www.youtube.com/playlist?list=PL7JRppjEn33aIrggv9opfecN4rksInQsM.

One of the most cherished beliefs among many people is this: religious people will go to heaven because they are religious. If they are sincere, pious, generous, sacrificial, prayerful, rigorous, and regular in their religious observance, they will ultimately be with God. Why? They are religious. Some may say: “It doesn’t matter what church you belong to, or even what religion you profess. The good people in all religions will go to heaven.” Or: “All religious people are going to heaven, just by different roads.”

The implication is that religious devotion somehow makes atonement for sin. That God will overlook the sins of all those who try to live by their religion and follow their religion’s rules in dealing with sin.

Is it good to be religious? Does religion, in and of itself, get God’s attention, or somehow obligate God? What about the Jews? Could their religion itself save them? Could they boast to God and others about their heritage, their possession of the Law, their understanding, or their performance? Ironically, they failed to live up to the very standards they professed! Recognizing that fact should drive them – and all “religious” people – to the only One who can make a relationship with God “just right” – Jesus the Christ.

So … does that carry any weight with God?

Matt 23:4 They add burdens but will not lift.

Is 52:5 “Now therefore, what do I have here,” declares the LORD, “seeing that My people have been taken away without cause?” Again the LORD declares, “Those who rule over them howl, and My name is continually blasphemed all day long.”

2 Sa 12:13 Then David said to Nathan, “I have sinned against the Lord.” And Nathan said to David, “The Lord also has taken away your sin; you shall not die. 14 “However, because by this deed you have given occasion to the enemies of the Lord to blaspheme, the child also that is born to you shall surely die.”

Acts 7:51 Uncircumcised in heart and ears.

First, entrusted with the oracles of God.

Cf. Ro 9:4 [Jews] who are Israelites, to whom belongs the adoption as sons, and the glory and the covenants and the giving of the Law and the temple service and the promises, 5 whose are the fathers, and from whom is the Christ according to the flesh, who is over all, God blessed forever. Amen.

Passage quoted: Ps 51:1 Be gracious to me, O God, according to Your lovingkindness; According to the greatness of Your compassion blot out my transgressions. 2 Wash me thoroughly from my iniquity And cleanse me from my sin. 3 For I know my transgressions, And my sin is ever before me. 4 Against You, You only, I have sinned And done what is evil in Your sight, So that You are justified when You speak And blameless when You judge.

Questions that will not excuse:

If some do not believe, is God really fair in condemning them?

If lying highlights God’s truthfulness, is it really all that bad?

If evil brings God glory in His judgment of evil, why isn’t that OK?

The Jews’ advantage (3:1) … not preferential treatment.

Shock! Words condemning the heathen are now applied to the Jews! Here are the passages quoted. You may want to go back and read them in their Old Testament context, too.

Ps 5:9 There is nothing reliable in what they say; Their inward part is destruction itself. Their throat is an open grave; They flatter with their tongue.

Ps 140:3 They sharpen their tongues as a serpent; Poison of a viper is under their lips. Selah.

Ps 10:7 His mouth is full of curses and deceit and oppression; Under his tongue is mischief and wickedness.

Is 59:7 Their feet run to evil, And they hasten to shed innocent blood; Their thoughts are thoughts of iniquity, Devastation and destruction are in their highways. 8 They do not know the way of peace, And there is no justice in their tracks; They have made their paths crooked, Whoever treads on them does not know peace.

Ps 36:1 Transgression speaks to the ungodly within his heart; There is no fear of God before his eyes.

Before God, all the world must answer.

But before the Law, every mouth is closed.

By works of Law, no flesh is justified.

“Religious” people have broken, and so they cannot rely on, the Law.

Is there another way, in fact, the only way?

Both Gentiles and Jews May Be and Must Be … Delivered by the Good News!